'Whats the story, I'll tell you what the story is Nidge, you just tried to have me clipped and you missed!'

- Darren's last words to Nidge before he is killed

Darren Treacy is the overall main deuteragonist of the TV Series, ‘Love/Hate.’ He serves as the main protagonist in Series 1-3 and a posthumous character in Series 4-5. He is portrayed by Robert Sheehan. 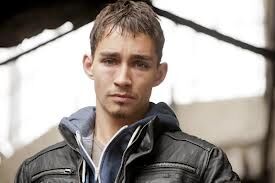 Darren orginally lived in Dublin with his girlfriend Rosie until he had to leave the country when the guards found a gun is his house. He went to live in Spain for a almost a year until returning for his brother Robbie's release from prison. Darren had worked for crime and drug kingpin John Boy Power but when his brother Robbie was murdered Darren grew increasingly suspicious of John Boy. This eventually led to him working for Nidge, John Boy's lieutenant in a move to overthrow John Boy. Darren was eventually betrayed by Nidge in order to appease the IRA, leading to his death.

Darren is a tall dark haired man who is somewhere in his 20's, his definite age is never revealed. In Season 1 he had long hair however he had changed it in Season 2, he has a small amount of facial hair mostly on the chin. His clothing usually consisted of dark jeans and leather jackets. However, for all of Season 3 he is only seen wearing a blue hoodie, jeans and a black leather jacket. This is possibly due to him being on the run.

Darren is usually seen as quite moral at heart, caring for the people he loves and loyal to his brother and later Nidge. He always thinks twice and is described as kind by his sister Mary and ex girlfriend Rosie. His brother Robbie's death affected him badly, and immediately wanted to kill the person responsible. However sometimes if something didn't go Darrens way he wouldn't take it well. He will do whatever he was told like helping John Boy with drug business or even killing someone for money.

Community content is available under CC-BY-SA unless otherwise noted.
Advertisement